The Cabbagetown Festival takes place annually on the weekend after Labour Day on Parliament Street in Toronto, Ontario, Canada. It features food, arts and crafts, and a film festival. I always look forward to this festival to enjoy street food that it usually offers. There are many food options and every stand you pass by is more seductive than the last. Finding something authentic is a safe bet because there is a sizeable population from a variety of cultures in the Cabbagetown area.

Needless to say, I went to the Festival with an empty stomach so my taste buds were yearning for something exotic. Instead of writing about every little thing I ate, here are some of my favorite eats. Avoiding all of the vendors with long lines (I like instant gratification), I waltzed my way towards a vendor making awfully huge amount of chopping sound. Not surprisingly it was Kottu Roti. You’ll know when Kottu Roti is being made because of the noise – the ingredients are usually simultaneously chopped on a hot griddle using a large pair of meat cleavers, producing a noisy sound. 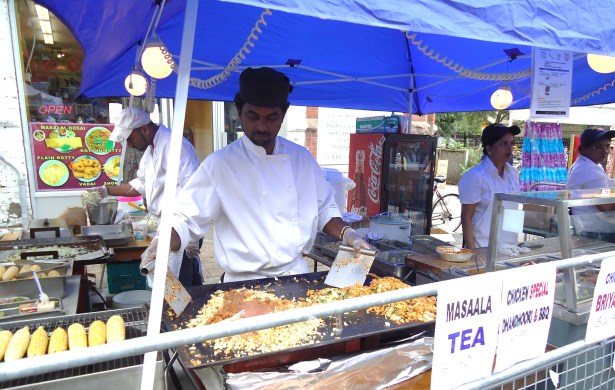 Kottu Roti (commonly known as Kottu) is one of the meals I enjoy the most from Sri Lanka. When I was a kid in Sri Lanka, it was a forbidden pleasure. Kottu then was well within social boundaries. As I remember, it used to be a cheap, takeaway meal for the lower classes. I remember my parents mention doggy hygiene of Kottu Roti establishments as the reason for not patronizing them (it is all about framing). During my recent visits to Sri Lanka I realized that it has become almost a staple diet. Kottu has finally managed to transcend social boundaries. It is not uncommon now for many well-to-do club crawlers in Colombo to end their night outs with a Kottu as a mid-night snack. But, most Kottu establishments in Sri Lanka (generally small road-side restaurants) still look grungy and often dirty, in my opinion.

Kottu is consisted of wheat flatbread very similar to Indian Paratha, vegetables (e.g., cabbage, carrots, and onions), eggs and/or meat (usually beef or chicken, but meat is optional), and spicy curry sauce. Traditionally, it is made on a purpose-made metal griddle, and the cutting up and mixing of ingredients is done using two blunt metal blades. It can be found in almost all parts of Sri Lanka, and is generally eaten as a dinner meal. It is not something that people have regularly, but it’s not something they have only once a year either.

My Cabbagetown version was intensely gratifying and I chowed it down with my Chai Latte from Starbucks. I was intrigued with the tastes of Sri Lanka. The texture was perfect (neither soggy nor dry) and had the right note of spices. My only complaint was that it had little chicken, but it was accompanied with enough vegetables. 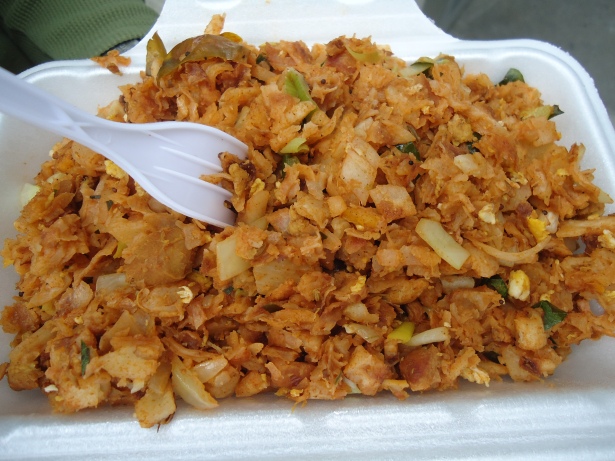 My next gastro prey was Murtabak from Malaysia, a dish of grilled savoury roti stuffed with chicken, garlic, and onion. The filling is dollopped on to a very thin roti, which is then folded to form a large, square package. I have been to Malaysia many times but I never had Murtabak there. So, naturally I was curious about this dish. Apparently Murtabak originated in Yemen and Hija region of Saudi Arabia. The word murtabak is derived from mutabbaq which in Arabic means folded. Through traders it has spread first to India and then to Southeast of Asia. My Murtabak was beautifully browned and crispy, was quartered and served with homemade coconut chutney and chili-garlic sauce. It had a good amount of well-seasoned stuffing as well.

Although the weather wasn’t ideal, all in all, the 2012 Cabbagetown Festival was a successful gastronomic adventure. I think festivals like this are a clear celebration of street food, and an indication of how badly Torontonians need a diverse street food scene. It was a clear snapshot of what our street food scene in Toronto could look like.

Until next time, happy street eating!